WKBW
NIAGARA FALLS, N.Y. (WKBW) - Artist Jonathan Rogers said Halloween was his inspiration for his nationally-renowned cartoon Witch's Night Out in 1978, which is now being turned into a musical!
“Halloween needed a new interpretation and new definition. It was drawings brought to life and everything was drawn by hand,” Rogers said.
After more than three decades, Rogers, who lives in Niagara Falls, said his story and eccentric characters will literally be coming to life on stage.
“We worked out a deal with the Broadway people, who purchased an option on the story to develop it into a musical,” Rogers said.
For this artist, it's a dream come true. “Everybody is excited about it. It gives it a legitimacy and power that it didn't have before it was connected with a Broadway show. Wow!”
The cartoon featured the voices of comedic legend Gilda Radner and others when they were just starting out in their careers in the late 70s. Rogers said it was Radner's voice that gave the witch her deep character.
“She has power and the witch's wand symbolized the power that women have,” Rogers said.
He said the cartoon is fun for people of all ages and the musical is going to take it to a new level, keeping his witch alive for generations to come.
“She's sort of my female component with gestures and facial expression. She brought a lot into my creative source and she was my muse,” Rogers said.
Posted by CROSS/ROGERS at 10:28 AM No comments:

Queens and Kings Inc. has acquired the musical theater rights to WITCH’S NIGHT OUT, a heartfelt comedy focusing on the magical mischief of a witch and the antics that ensue after she fulfills the Halloween wishes of some children. Originally premiering in 1978 on NBC--the animated special “Witch’s Night Out” was created and produced by Jonathan Rogers (formerly known as John Leach) alongside partner Jean Rankin. The popular special ran yearly on the Disney Channel and Fox between 1983 and 1993, and was more recently released in a Halloween DVD collection by Mill Creek Entertainment in September 2014. Emmy-award winning composer/songwriter Jim Dooley, owner of Queens and Kings Inc, is helming the upcoming project alongside director Rye Mullis, of Ringling Bros. and Barnum & Bailey.

Dooley says, "After working on Ringling Bros. and Barnum & Bailey's innovative production of "Legends", I am thrilled to partner with my director, Rye Mullis, on the new Musical Comedy: "Witch's Night Out". Our goal is to create a unique and exciting family musical theater experience that celebrates the spirit of Halloween and the idea of exploring your own "Inner Monster. To be able to adapt this cult classic television special into a full scale musical, is an opportunity that I am truly excited about."

Mullis adds, "The Halloween special of "Witch's Night Out" was worn out on our VHS when I was a kid. I loved the tale of two kids whose dream of becoming real monsters, comes true with the help of their own Witch-y version of a "Fairy Godmother" on Halloween. It was the perfect the combination of unique animation, a great story and the comedic genius of Gilda Radner and Catherine O'Hara. It has stuck with me into adulthood. A year ago, I noticed that there were no Halloween musicals for families (most "horror" musicals are for adults i.e., "Rocky Horror Show"). When I mentioned the idea of turning "Witch's Night Out" into a musical to Jim Dooley, he jumped on the idea, set the wheels in motion and made everything happen. Jim is the only composer I could consider working on this musical with, he has that magical, whimsical and exciting talent that is going to bring this vintage special to a whole new generation of families in a fresh and exciting Halloween musical. We are so excited to begin this journey and in the words of our Fairy Godmother: "Just you wait my darlings till you meet your gracious hostess."

The original Halloween classic, “Witch’s Night Out”, was an animated special originally produced in Toronto and featuring some notable Canadian voice talent such as actress Fiona Reid (King of Kensington), comedian Catherine O’Hara (Home Alone), and SNL alum Gilda Radner.  The plot follows a lonely witch (Radner) who is summoned by some small children to a town that has lost sight of the holiday’s spirit. At the kids’ wishes, the witch transforms the youngsters into the real life versions of their costumes. Chaos results when a mob of grumpy citizens form in retaliation, including characters such as Nicely (voiced by Leach) and Malicious (voiced by O’Hara), causing the witch to lose her magic wand. In the end, the witch must work together with her new friends to restore her powers, turn the children back into humans, and teach everyone the true meaning of Halloween.

Jim Dooley is an Emmy Award-winning composer/songwriter who has received accolades for a variety of works in film, television, video gaming and live theatrical industries. In 2008, Dooley received a Primetime Emmy Award for “Best Original Music Composition for a Series” for ABC’s “Pushing Daisies.” More recently, two projects featuring Jim’s music were also honored with Academy Award nominations, the animated short “Maggie Simpson in The Longest Daycare”, and the live-action short “The Buzkashi Boys”. Jim’s portfolio also boasts several collaborations with many of the top names in music, from Hans Zimmer, Kristin Chenoweth to Babyface. In addition, Dooley also wrote music for several animated feature scores such as the German animated release “Urmel aus dem Eis” (“Impy’s Island”) and its sequel; DreamWorks Animation’s musically acclaimed short “First Flight.” Currently, Jim is scoring TNT’s post-apocalyptic drama “The Last Ship,” with collaborator James S. Levine and has recently emerged into the sports industry with his theme for the 2015 Senior PGA Championship.

Posted by CROSS/ROGERS at 9:56 AM No comments:

Legit Editor@GCoxVariety
Jim Dooley, a composer and songwriter who works regularly in TV, has acquired the musical theater rights to “Witch’s Night Out,” a 1978 animated special that starred the voices of Gilda Radner and Catherine O’Hara.
Dooley’s Queens and Kings Inc. aims to develop the property into an Off Broadway-scale family musical with a Halloween theme. He’ll work with director Rye Mullis, the director of three editions of the Ringling Bros. and Barnum & Bailey Circus, to develop the show.
The Canadian animated special “Witch’s Night Out” centers on two kids who enlist the help of a witch, played by Radner, to achieve some truly monstrous Halloween costumes, and follows the chaos that ensues when the witch accidentally loses her magic wand. Produced by Jonathan Rogers with partner Jean Rankin and originally airing on NBC, the special ran annually on the Disney Channel and Fox between 1983 and 1993, and last year was released as part of Mill Creek Entertainment’s Halloween DVD collection.
Dooley currently composes the score for TNT drama “The Last Ship,” and has worked in the past on shows including “Pushing Daisies.” He also wrote the music for the Oscar-nominated short “Maggie Simpson in The Longest Daycare.”
No timeline for the stage version of “Witch’s Night Out” has yet been set.

Posted by CROSS/ROGERS at 11:12 AM No comments:

Jonathan and his family. 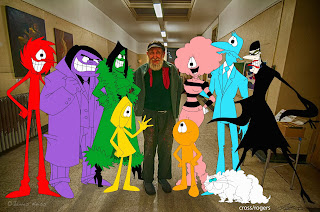 Posted by CROSS/ROGERS at 10:33 PM No comments: